Durban – “Chaos” is what transport and freight operators are calling an unconfirmed labour dispute at the Durban Container Terminal which gridlocked traffic near the port and left operators frustrated on Tuesday. 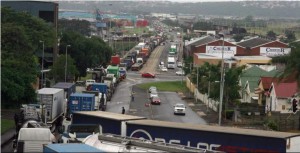 The view from Umbilo Road looking towards Bayhead Road, with the Bluff in the distance. A labour dispute at the Durban Container Terminal on Tuesday delayed trucks serving the port, leading to traffic congestion in Sydney Road, Maydon Wharf, South Coast Road and the M7 towards Southway Mall. Picture: Sibusiso Ndlovu

Freight and logistic operators said they had initially received no word from Transnet, but learnt of the problem from their truck drivers stuck in the traffic that the congestion had been building up from Monday night.
On Tuesday morning, the Durban Container Terminal (DCT) sent out two SMS messages to operators.
“Please be advised DCT Pier 1 has experienced a work stoppage from 06h00 this morning. Transnet Port Terminals management is currently engaging with employees.”
The second message read: “Further to the previous communication, the issue with labour has not been resolved yet. Transporters are requested to kindly pull out trucks – apologies for the inconvenience caused.”
On Wednesday morning, most trucks were parked at their depots, easing the congestion overnight. But traffic began to build up this morning around Bayhead Road as they returned.
Heavy duty trucks were parked along Bayhead, Maydon Wharf, South Coast and Umbilo roads causing gridlocking.
A Durban logistics and freight company operator, who did not want to be named for fear of reprisal from Transnet Port Terminals, said they were lucky that one of their trucks had been offloaded at around midnight after being in the port from the morning.
“Drivers have to wait in the port queues for up to 18 hours. The company forks out two or three days’ wages on one load. There are no ablution facilities or food in the vicinity. This week we had to pick up 30 containers from the DCT but could only load two. Durban is a no- go area now and it is causing the freight industry to operate at a loss. We remain optimistic about our future,” he said.
Another logistic transport operator said DCT management was to blame for its staff’s attitude towards work.
He said at midday on Tuesday port authorities had blamed the wind for delays which he found hard to believe because of the earlier SMS.
He said trucks and cars were driving against the traffic towards Bayhead causing more chaos.
Janna Strang, of public relations company, Promote Communications, said on behalf of Transnet Port Terminals: “I have been trying to get more information about the excessive congestion and am hoping to have some in-depth detail around this to send to you later today. I so appreciate your patience in this regard and will revert asap!”

We use cookies on our website to give you the most relevant experience by remembering your preferences and repeat visits. By clicking “Accept All”, you consent to the use of ALL the cookies. However, you may visit "Cookie Settings" to provide a controlled consent.
Cookie SettingsAccept All
Manage consent

This website uses cookies to improve your experience while you navigate through the website. Out of these, the cookies that are categorized as necessary are stored on your browser as they are essential for the working of basic functionalities of the website. We also use third-party cookies that help us analyze and understand how you use this website. These cookies will be stored in your browser only with your consent. You also have the option to opt-out of these cookies. But opting out of some of these cookies may affect your browsing experience.
Necessary Always Enabled
Necessary cookies are absolutely essential for the website to function properly. These cookies ensure basic functionalities and security features of the website, anonymously.
Functional
Functional cookies help to perform certain functionalities like sharing the content of the website on social media platforms, collect feedbacks, and other third-party features.
Performance
Performance cookies are used to understand and analyze the key performance indexes of the website which helps in delivering a better user experience for the visitors.
Analytics
Analytical cookies are used to understand how visitors interact with the website. These cookies help provide information on metrics the number of visitors, bounce rate, traffic source, etc.
Advertisement
Advertisement cookies are used to provide visitors with relevant ads and marketing campaigns. These cookies track visitors across websites and collect information to provide customized ads.
Others
Other uncategorized cookies are those that are being analyzed and have not been classified into a category as yet.
SAVE & ACCEPT